This Is Why Yeti Coolers Are So Expensive – Are They Worth It? Yeti coolers are significantly more expensive than the other options on the market. While I usually encourage people to buy the very best kit that they can afford, I’m not sure I agree when it comes to the Yeti brand.

Yeti coolers are expensive because of the brand image. It’s also true that Yeti makes excellent coolers that work much better than the budget alternatives. But they are also a bit of a fashion statement for outdoors people.

This article will give you an honest review of Yeti coolers. That way, you can decide if they are worth the money or if you’d rather get a more affordable alternative and spend your funds on something else.

I’ll also suggest some cheaper options that I think are just as good. (No offense, Yeti!)

What’s So Great About Yeti Coolers?

Don’t get me wrong; Yeti coolers are terrific pieces of kit.

Typical coolers have half an inch of polystyrene to insulate your food. They aren’t always robust, and they can crack or even start melting in really hot conditions.

Yeti coolers, on the other hand, come with up to three inches of high-quality insulation. They are ridiculously strong and will last for many years. They can survive some of the most sweltering conditions, and users rate them highly.

Yeti coolers are also certified Bear Safe, so they are an excellent choice for camping in bear country.

Here’s a promotional video that Yeti made to show their cooler being bear-tested!

These coolers are so strong because they were made using a process called roto-molding. It involves baking the insulation at a very high temperature, which creates a thick armor around the inner chamber.

This makes Yeti coolers really effective, but that’s not the only reason they are so popular.

Why Are Yeti Coolers so Popular?

That’s a pretty glowing review I just gave. So why am I hesitant to say that they are worth the money?

The thing is, you’re not paying just for the design. You’re also paying a substantial extra ‘fashion tax.’

The truth is, other coolers are almost as good, for a fraction of the price. So though I do think that Yeti coolers are one of the best on the market, I don’t think the price hike is totally justified.

It’s a bit like paying for a super expensive pair of branded sneakers. Are they that much better for your feet than a cheaper pair? Maybe, a little. But you are paying mostly for the image that comes with owning those sneakers.

Yeti coolers are so expensive because they are a status symbol. They show that you have money to spare, and the product image is one of the ‘rugged adventurer’.

I’m not saying that’s a bad thing. Building an image is an essential part of marketing for any company. I’m just saying that the vast price difference isn’t all about quality. A fair amount of customer self-image is going on there, too.

Yeti Coolers vs Other Cooler Brands

Yeti coolers are much better than your average cooler. This is because of the roto-molding process, which creates incredibly thick and strong insulation. The product can last for a lot longer than a flimsy polystyrene cooler that costs $30.

Yeti coolers will last you for many more years than the cheapy ones, and they are going to do a better job of keeping your stuff cool. But they aren’t worth more than 10 times the price!

The good news is that lots of other companies make rotomolded coolers now. Many of them are a hell of a lot cheaper than the Yeti brand.

They aren’t all as functional, and they certainly don’t come with the same reputation as the Yeti coolers, but they are perfectly good at their job.

So if you want to find something of similar quality for a lot less money, just search for ‘rotomolded cooler’.

It depends on what you’re looking for.

If image is important to you and you have the money to spare, Yeti would be the best choice. (There’s no judgment here!) It’s undeniable that Yeti coolers look great, and they are also super functional. So you wouldn’t exactly be wasting your money.

But if you don’t have extra money to burn, you don’t need to worry. Some perfectly good alternatives are out there that won’t break the bank. (And to be honest, who is really going to care what brand of cooler you have?) 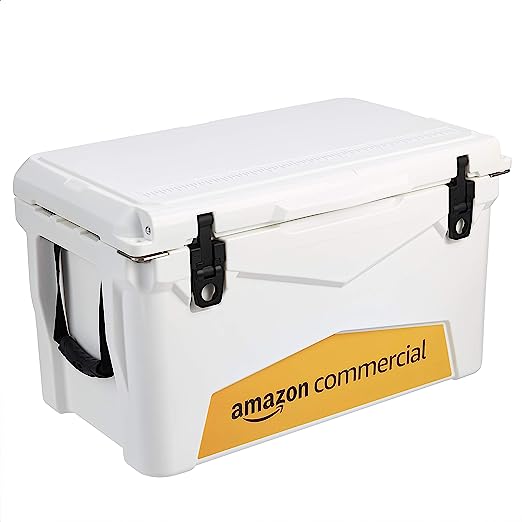 Amazon Commercial Cooler
$213.09
CHECK ON AMAZON
We earn a commission if you click this link and make a purchase at no additional cost to you.

The best value rotomolded cooler I could find online was the Amazon Commercial Cooler. Let’s be real; this thing isn’t particularly nice-looking. The massive yellow Amazon sticker screams, “I was the cheapest cooler available!”

But it does the job.

You have three inches of commercial-grade insulation that should keep your ice cool for three to five days. (But it depends on the conditions.)

It also has built-in bottle openers, so it would be really handy as an overflow fridge for a small bar or restaurant, or it could work well for a fishing or camping trip where appearances don’t matter to you. 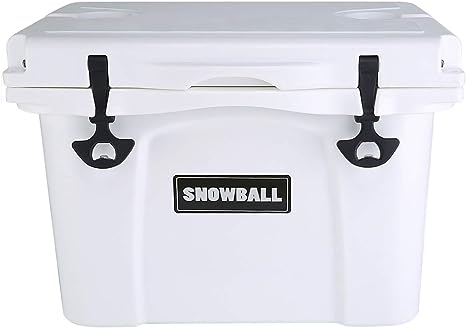 Snowball Cooler
$169.99
CHECK ON AMAZON
We earn a commission if you click this link and make a purchase at no additional cost to you.

If you think that the Amazon Commercial Cooler looks a bit too tacky, you might want to consider a Snowball Cooler.

This isn’t quite as thick as the Yeti or Amazon Commercial Cooler, but it still has a good two inches of insulation. It’s a bit lighter than the other two coolers, so it might be more convenient for a camping trip.

The Snowball is the cooler that I would choose. I’m not particularly fussed about appearances, but I like to take some pride in my belongings and take care of them.

At the same time, I don’t want to waste my money on things just because they are ‘cool.’ (Pun not intended!)

I’m also famous for breaking things, but the Snowball cooler seems pretty bombproof. Sure, it’s not going to be quite as strong or efficient as the Yeti cooler but the difference in quality versus price isn’t reasonably aligned, in my opinion.

It’s impossible to say how long any cooler will stay cold. It depends on so many factors, including the ambient temperature and how full the cooler is. Most people say that the Yeti stays cold for at least three days, but some people report that it stays nice and cool for over a week.

Most coolers work both ways, and the Yeti brand is no exception. So, if you had a hot meal that you wanted to keep warm, you could pop that in your Yeti cooler, too. But you can’t keep cold and hot things in the cooler at the same time. You need to choose which is more important to you!

How much does it cost to make a Yeti cooler?

That information is not publicly available. My educated guess is that it costs between $30 and $100 to make a rotomolded cooler, depending on the size and finish. You’d then have to add the cost of detailing, branding, and shipping.

By the time they’ve paid their employees and overheads, Yeti might be looking at a couple of hundred dollars to produce their luxury coolers. (There’s no way to know for sure as an outsider, though!)

What does the Yeti brand stand for?

As far as I can tell, “Yeti” isn’t an abbreviation for anything. The brand is named after the Yeti from Nepalese folklore—also known as the abominable snowman!

Does Yeti ever go on sale?

Yes, Yeti does sometimes go on sale. They don’t go down in price very often, though, so if you see a Yeti cooler on sale, you probably want to grab it while you can.

Yeti coolers are probably the best coolers on the market. If you have money to spare, there’s no reason not to go ahead and get one.

But it’s not necessary to spend so much to get a decent cooler. Most rotomolded coolers will be more than good enough to keep your food and beers cold on your next camping trip.

Bear in mind that rotomolded coolers are significantly heavier than conventional polystyrene coolers.

They are also more effective. And considering that you’re never going to bring a cooler backpacking, there’s no reason why the extra weight should be a problem. (You’ll be throwing it in the back of your car, after all.)

So is a Yeti cooler really worth it? Only you can say. But I hope I’ve given you all the information you need to make the right decision for you!