How to Boil Water Without Electricity or Gas

When it comes to boiling water without electricity or gas, you have three great options.

You can start a campfire, get yourself a solar cooker, or use a system that runs on meths. (No, I’m not suggesting that you stock up on illegal drugs; this is a different kind of meth!)

This article will tell you everything you need to know about boiling water with less conventional fuel systems, so you can avoid nasty injuries or setting your favorite National Park alight.

Boiling Water With a Solar Cooker

A solar cooker is simply a device that uses direct sunlight to cook food.

Getting your first solar cooker can be a bit of a minefield, but making the right choice isn’t as complicated as it might seem.

There are four main kinds to know about. I will briefly describe them below.

These are great for slow roasting, but they won’t be the best for boiling water, so purchase with caution!

These are better for boiling water, as well as frying and grilling.

For boiling water, you will want one of the ‘quick cookers.’

Personally, I would go for a parabolic cooker because you can normally boil a higher volume of water.

Having said that, evacuated tube cookers tend to fold down smaller, so they would be a better choice if you’re packing light for a camping trip.

Making Your Own Solar Cooker

Some people like the challenge of making their own solar cooker. You don’t have to be an expert to knock something together.

This video will show you how to make a gorgeous DIY solar cooker that looks nicer than anything I’ve seen on the market! (You’re going to need quite a few tools, though, and plenty of free time to chip away at this project.)

If you’re feeling less ambitious, you can still spend some quality time with your kids by building a mini solar oven with a pizza box and foil. It doesn’t cost much, and it’s a great way to get your kids engaged with a little science project in the great outdoors.

(The smores at the end will be a great motivator!)

Solar cookers aren’t too expensive these days, though. You should be able to buy a decent one for between $100 and $200.

Note: You’ll be able to boil water with the first DIY video I showed you, but the pizza box cooker will not get hot enough; it’s just a little project to have fun with your family.

Boiling Water on a Campfire

It is surprisingly easy to start a wildfire in the great outdoors, with fire traveling below the ground through the underground root systems of grasses and trees.

To avoid wiping out your favorite National Park (and ending up in jail!), you’ll need to use your common sense and follow the rules of the place where you are camping.

Pros of Boiling Water on a Campfire

Cons of Boiling Water on a Campfire

How to Boil Water on a Campfire

Once your fire is nice and hot, you can put your water on to boil.

You will want to pour the water into a good-quality metal pot or camping kettle that won’t warp with the heat. You can also use a fire stand to make your life a lot easier.

It will take between 10 and 20 minutes for your water to boil on a fire, but sometimes it’s nice to slow down and do things the old-fashioned way!

If you’d like more information about cooking on a campfire, check out the best camping cookware for open fire cooking.

Starting a Campfire the Right Way

Here’s the best practice for starting a Leave No Trace campfire:

Make sure it’s not illegal where you are camping. Eighty-four percent of wildfires in the United States are started by people! (US National Park Service)

Collect firewood. Use the ‘4 Ds’ from the Leave No Trace Organisation for collecting your wood.

Use a fire pan to avoid accidentally starting a wildfire. You can get some amazing mini fire pits for wild camping these days, and they aren’t expensive. Or you could consider a fold-away fire mesh if you’re looking for something bigger.

Dig out the topsoil if you can’t use a fire pan. You can dig a shallow pit where you’d like the fire to be, then replace the topsoil when you are finished and the fire is out. This will prevent ugly fire scars that take ages to heal over and will keep all the amazing bacteria and organisms in the topsoil alive.

Make sure to put out your fire after you are done. This can take several buckets of water and longer than you think. Never leave your fire unattended!

Another way to boil water without gas or electricity is to use a cooking system that runs on meths.

These are also known as alcohol cookers or spirit burners.

Just to warn you, you’re probably going to get some weird results when you Google ‘meths cooker.’ I’ve provided an example below so you know what you’re looking for. 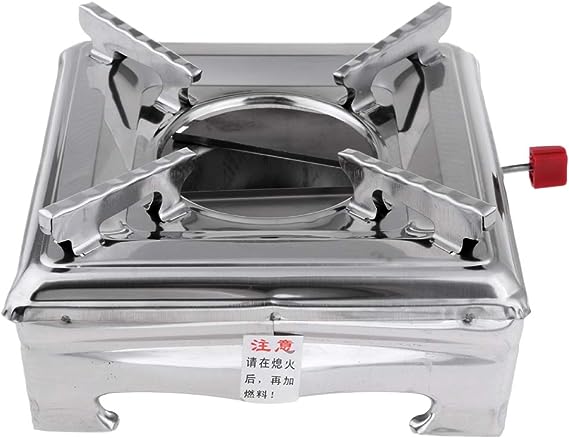 Baosity Camping Cooking Spirit Burner Alcohol Stove CHECK ON AMAZON
We earn a commission if you click this link and make a purchase at no additional cost to you.

Here are the basic steps to boiling water on an alcohol stove:

It will take about 10 minutes to boil a liter of water. You’ll be able to boil 20 liters of water for every 1 liter of fuel that you use.

Alcohol burners have a bit of a reputation for being dangerous, but I find that perception to be inaccurate.

So long as you use the correct type of fuel (denatured alcohol) and don’t attempt to use them inside your tent, there’s really nothing more dangerous about alcohol burners than any other cooking system that uses a flame.

Just remember that you can’t always see an alcohol flame, so be careful to check that the stove is off before touching it. Just keep some water on hand for emergencies and you’ll be fine!

Making Your Own Alcohol Burner

Some people like to make their own alcohol burner from an old soda can. This can be an excellent way to repurpose trash, and it’s also really lightweight.

It’s easy and cheap to make an alcohol burner this way, and there’s no reason the finished product should be any more dangerous than a shop-bought stove. (Just be careful about cutting your fingers with the scalpel when you’re cutting the can.)

The reason why you might want to buy a stove from a hiking store instead is that they tend to be stronger and will last longer. You can also boil more water on a larger stove, but the soda cans are a fun little project for an overnight camp.

The Importance of Boiling Water

Boiling water is an excellent way of protecting yourself from getting sick in the great outdoors. You need to boil it for a good five minutes to be sure you’ve killed off any dangerous bugs.

Please be aware that boiling water will not remove any heavy metals polluting the water, so there are still some risks involved with this method.

Alternatives to Boiling Water When Camping

If you’re on a thru-hike and can’t access treated water, you have a few options. In addition to boiling your water, you can use water purification tablets or a portable water filter.

Water purification tablets are a cheap and portable solution. You can easily fit them in your pocket, and you don’t have to mess around with boiling water to have a drink.

The downsides are that the treated water can have a chemical aftertaste and you still need to wait a good 35 minutes before you can drink the water you are purifying.

If you are pregnant or have a thyroid condition, the iodine in these tablets could be dangerous.

A portable water filter is a neat solution for backpackers.

It removes microplastics and bacteria from water, and you don’t have the iodine problem associated with purification tablets.

Water filters for backpacking fold up nice and small, so you shouldn’t have a problem bringing them along for a thru-hike.

You have loads of options when it comes to boiling water on your next camping trip. Even if you don’t have electricity or gas, you can use a solar cooker, meths stove, or even campfire.

If you’re boiling water for safety purposes, you need to do so for a good five minutes after the water reaches bubbling temperature.

You can also use purification tablets or a water filter to make untreated water safe to drink.

I hope you found this article helpful, and I wish you many happy and safe adventures on the trails!